To correlate preoperative ultrasound examination with intraoperative and anatomo-pathological findings, including estimation of number, localization and size of uterine myomas, uterine diameters and volume.

A prospective study on 126 women undergoing surgery for uterine myomatosis at Campus Bio-medico between May 2013 and April 2014. The patients were divided into two groups: one submitted to hysterectomy and the other submitted to open myomectomy. Ultrasound scans were performed 1 day before surgery by the same expert sonographer. The number of myomas at ultrasound was compared to intraoperative visualization and anatomo-pathological findings. Wilcoxon Test was applied to compare data registered with each technique.

Our data show that ultrasound has limits in identifying the exact number of uterine myomas. This mapping is particularly needed in a minority of patients with usually desiring fertility who need a debulking procedure due to the large size and/or number of myomas or myoma location causing symptomatology. In patients with more than six myomas, voluminous uterus, a second-level examination such as Magnetic Resonance may be helpful. 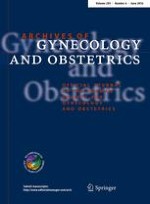 Comparison of the symptomatic response in Indian menopausal women with different estrogen preparations for the treatment of menopausal symptoms: a randomized controlled trial

Erratum to: The new WHO classification of ovarian, fallopian tube, and primary peritoneal cancer and its clinical implications