This study sought to determine whether improvements in the care of children with congenital heart disease (CHD) have changed the epidemiology of infective endocarditis (IE). A retrospective study of patients 18 years of age and younger treated for IE from 1992 to 2004 (era 3) was conducted at the authors’ children’s hospital in New York City. This study was compared with two previous studies conducted at the same hospital from 1930 to 1959 (era 1) and from 1977 to 1992 (era 2). During the three eras, IE was diagnosed for 205 children with a median age of 8 years during eras 1 and 2, which decreased to 1.5 years during era 3, partly because of IE after cardiac surgery for young infants. In era 3, nonstreptococcal and nonstaphylococcal pathogens associated with hospital-acquired IE increased. Complications from IE declined during era 3, but after the widespread availability of antibiotics in 1944, crude mortality rates were similar in eras 1 (32%), 2 (21%), and 3 (24%). However, in era 3, mortality occurred only among subjects with hospital-acquired IE. The epidemiology of pediatric IE has changed in the modern era. Currently, IE is most likely to occur among young children with complex congenital heart disease. Pediatric IE remains associated with high crude mortality rates when it is acquired in the hospital. 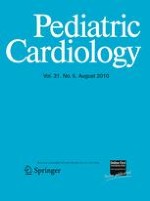 Sudden Death of a Young Child Due to Cardiac Rhabdomyoma