In this study, postoperative results of intertrochanteric curved varus osteotomy (CVO) for idiopathic osteonecrosis of the femoral head (ION) were studied retrospectively and optimal indication of CVO was considered.

Between 1995 and 2011, CVO was performed in 51 patients (53 hips) for the treatment of ION in our department. The patients who had the potential to obtain acetabular coverage of more than one-third of the intact articular surface on pre-operative AP hip radiographs in maximum abduction were considered suitable for this operation. For radiological assessment, a ratio of necrotic volume, a ratio of postoperative intact surface on the weight-bearing area, progression of collapse, shortening length of the lower limb, and lateralization of great trochanter were evaluated.

The results of CVO for ION were successful, if this procedure was indicated for cases with intact load-bearing area more than 40 %. 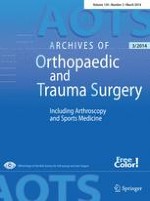