This study enrolled 146 patients who underwent DP. FC was defined as a cyst-like lesion ≥ 10 mm in diameter on CT imaging at postoperative day (POD) 7. FC size, irregularity of FC margin, and air bubbles in FC were investigated. In addition, clinical data were retrospectively collected, and useful predictive factors for postoperative pancreatic fistula (POPF) were analyzed.

While treating some FCs after DP was necessary for the management of POPF, others did not require any intervention since most of them spontaneously disappeared. FC size and drain amylase levels on POD3 were found to be significantly associated with POPF and could potentially help to determine appropriate treatment. 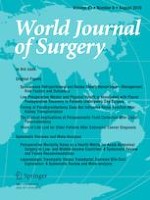 Defining the Three Delays in Referral of Surgical Emergencies from District Hospitals to University Teaching Hospital of Kigali, Rwanda

Letter to Editor: Can Mainstreaming Surgery Advocacy into NCD Advocacy Help Us Overcome the NCD Epidemic?