Idiopathic granulomatous mastitis (IGM) is a rare, chronic inflammatory benign breast disease. Although the etiology of this disease is unknown, it has been suggested that hormonal disorders, autoimmunity, smoking, and α1-antitrypsin deficiency may play a role in the etiopathogenesis. The aim is to investigate the changes in cytokine profiles including interleukin (IL)-4, -8, -10, -17, and tumor necrosis factor (TNF)-alpha in patients with IGM.

Forty-seven patients with pathologically diagnosed IGM and 30 healthy women were included. The cytokines including IL-4, -8, 10, -17, and TNF-alpha were measured by human enzyme-linked immunosorbent assay.

These results showed that proinflammatory cytokines including IL-8 and IL-17 have role in pathogenesis of IGM. However, the increased levels of IL-10 in especially patients in remission suggest that it reduces the release of proinflamatory cytokines as well as suppressing their function and activation for controlling IGM. Although IGM is thought to be a surgical disease, these cytokine changes indicate the presence of serious immune dysregulation. This suggests that in the treatment of IGM, treatment needs to evolve from surgery to medical treatment. 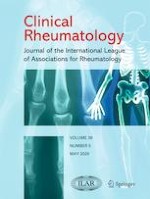 Effects of rituximab therapy on B cell differentiation and depletion

Mortality of Chinese patients with polymyositis and dermatomyositis