Breast cancer (BC) is a heterogeneous disease characterised by variant biology, metabolic activity, and patient outcome. Glutamine availability for growth and progression of BC is important in several BC subtypes. This study aimed to evaluate the biological and prognostic role of the combined expression of key glutamine transporters, SLC1A5, SLC7A5, and SLC3A2 in BC with emphasis on the intrinsic molecular subtypes.

SLC1A5, SLC7A5, and SLC3A2 were assessed at the protein level, using immunohistochemistry on tissue microarrays constructed from a large well-characterised BC cohort (n = 2248). Patients were stratified into accredited clusters based on protein expression and correlated with clinicopathological parameters, molecular subtypes, and patient outcome.

Clustering analysis of SLC1A5, SLC7A5, and SLC3A2 identified three clusters low SLCs (SLC1A5−/SLC7A5−/SLC3A2−), high SLC1A5 (SLC1A5+/SLC7A5−/SLC3A2−), and high SLCs (SLC1A5+/SLC7A5+/SLC3A2+) which had distinct correlations to known prognostic factors and patient outcome (p < 0.001). The key regulator of tumour cell metabolism, c-MYC, was significantly expressed in tumours in the high SLC cluster (p < 0.001). When different BC subtypes were considered, the association with the poor outcome was observed in the ER+ high proliferation/luminal B class only (p = 0.003). In multivariate analysis, SLC clusters were independent risk factor for shorter BC-specific survival (p = 0.001).

The co-operative expression of SLC1A5, SLC7A5, and SLC3A2 appears to play a role in the aggressive subclass of ER+ high proliferation/luminal BC, driven by c-MYC, and therefore have the potential to act as therapeutic targets, particularly in synergism. 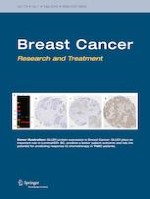