A prospective cohort study was developed to compare the surgical scars in the axilla and the inframammary fold at short-, medium- and long-term time periods after surgery.

Patients who underwent primary breast augmentation with implants in our department were divided into two groups based on the incision location they chose and were followed up for scar assessment at 1 month, 6 months and 12 months post-surgery from June 2012 to March 2016. Each scar was evaluated by the Vancouver Scar Scale (VSS) and patient satisfaction score. The data were analyzed with Wilcoxon rank-sum tests, Cochran–Armitage trend tests and Fisher’s exact probability tests based on the data type.

The total VSS score for the axillary incision group was significantly higher than that for the IMF incision group one and 6 months after surgery, mainly on the subscales of vascularity and height. At 12 months after surgery, the total VSS scores were not different between the two groups, and patients with both kinds of incisions were highly satisfied with scar appearance. The research confirmed that the scars at two locations can achieve comparable appearance in the long term after surgery. 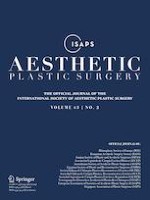 Pseudoesotropia in Chinese Children: A Triphasic Development of the Interepicanthal Folds Distance-to-Interpupillary Distance Ratio and Its Changing Perception

Effects of Hat-Shaped Mortised Genioplasty with Genioglossus Muscle Advancement on Retrogenia and Snoring: Assessment of Esthetic, Functional, and Psychosocial Results

A Flexible Suspension Technique of Blepharoplasty: Clinical Application and Comparison with Traditional Technique

Fat Graft in Composite Breast Augmentation with Round Implant: A New Concept for Breast Reshaping