The comparisons of phenotype and genotype between CADASIL and CADASIL-like patients and population-specific evaluation of CADASIL scale in China | springermedizin.de Skip to main content
TOOLBAR 1 2 3 4
SUCHE MENÜ 1 2 3 4

Cerebral autosomal dominant arteriopathy with subcortical infarcts and leukoencephalopathy (CADASIL) is the most common form of hereditary stroke disorder caused by mutations in the NOTCH3 gene. Although CADASIL scale is a widely used tool to screen clinically suspected CADASIL patients, the differential effects of this scale in various populations remain unknown.

92 CADASIL-like patients and 24 CADASIL patients were selected based on CADASIL scale and gene tests. The clinical, genetic and radiological characteristics were analyzed. 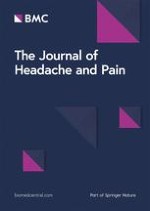 Expression of artemin and GFRα3 in an animal model of migraine: possible role in the pathogenesis of this disorder

Therapeutic efficacy and safety of Botulinum Toxin A Therapy in Trigeminal Neuralgia: a systematic review and meta-analysis of randomized controlled trials