We determined the serum concentrations of Programmed cell death-1 (PD-1) and its ligands (PD-L1 and PD-L2) in patients with esophageal squamous cell carcinoma (ESCC). 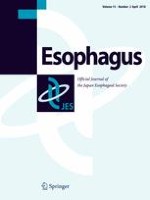 Minimally invasive esophagectomy in the prone position improves postoperative outcomes: role of C-reactive protein as an indicator of surgical invasiveness