The Crown flap is a modification of the keystone flap first described by Felix Behan in 2003. A third V-Y advancement limb is incorporated into the design in the central region of the flap where the line of maximum tension exists. This added V-Y closure utilizes surrounding tissue laxity and has been found to aid in closure of the defect centrally whilst not compromising the flap. The Crown flap is a useful modification to the keystone flap.
Level of Evidence: Level V, therapeutic study.

Titel
‘The Crown flap’: a modification to the keystone flap types I and IIA
Autoren:
Nicholas B. Haydon
David Caminer 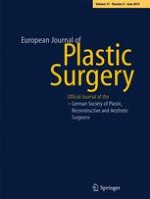 Is dermatome shaving a potential treatment for actinic keratosis in organ transplant recipients? A cross-sectional study