Medulloblastoma (MB) is the most common solid tumor among pediatric patients and corresponds to 20 % of all pediatric intracranial tumors in this age group. Its treatment currently involves significant side effects. Epigenetic changes such as DNA methylation may contribute to its development and progression. DNA methyltransferase (DNMT) inhibitors have shown promising anticancer effects. The agent Zebularine acts as an inhibitor of DNA methylation and shows low toxicity and high efficacy, being a promising adjuvant agent for anti-cancer chemotherapy. Several studies have reported its effects on different types of tumors; however, there are no studies reporting its effects on MB. We analyzed its potential anticancer effects in four pediatric MB cell lines. The treatment inhibited proliferation and clonogenicity, increased the apoptosis rate and the number of cells in the S phase (p < 0.05), as well as the expression of p53, p21, and Bax, and decreased cyclin A, Survivin and Bcl-2 proteins. In addition, the combination of zebularine with the chemotherapeutic agents vincristine and cisplatin resulted in synergism and antagonism, respectively. Zebularine also modulated the activation of the SHH pathway, reducing SMO and GLI1 levels and one of its targets, PTCH1, without changing SUFU levels. A microarray analysis revealed different pathways modulated by the drug, including the Toll-Like Receptor pathway and high levels of the BATF2 gene. The low expression of this gene was associated with a worse prognosis in MB. Taken together, these data suggest that Zebularine may be a potential drug for further in vivo studies of MB treatment. 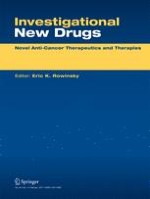 A photodynamic bifunctional conjugate for prostate cancer: an in vitro mechanistic study