The effect of antibiotic use on prevalence of nosocomial vancomycin-resistant enterococci- an ecologic study | springermedizin.de Skip to main content
TOOLBAR 1 2 3 4
SUCHE MENÜ 1 2 3 4

Vancomycin-resistant enterococci (VRE) are among the most common antimicrobial-resistant pathogens causing nosocomial infections. Although antibiotic use has been identified as a risk factor for VRE, it remains unclear which antimicrobial agents particularly facilitate VRE selection. Here, we assessed whether use of specific antimicrobial agents is independently associated with healthcare-associated (HA) VRE rates in a university hospital setting in Berlin, Germany.

We conducted the study between January 2014 and December 2015 at the Charité-university hospital of Berlin, Germany. From the hospital pharmacy, we extracted data for all antibacterials for systemic use (anatomical therapeutic chemical (ATC)-classification J01) and calculated ward specific antibiotic consumption in defined daily doses (DDDs) per 100 patient-days (PD). We used the microbiology laboratory database to identify all patients with isolation of invasive or non-invasive VRE and calculated HA-VRE incidence as nosocomial VRE-cases per 100 patients and HA-VRE incidence density as nosocomial VRE-cases per 1000 PD. We defined VRE isolates as hospital-acquired if they were identified three days or later after hospital admission and otherwise as community-acquired (CA-VRE). We performed univariable and multivariable regression analyses to estimate the association of the frequency of HA-VRE per month with antibiotic use and other parameters such as length of stay, type of ward or presence of at least one CA-VRE on ward. In a second analysis, we considered only patients with VRE infections.

We included data from 204,054 patients with 948,380 PD from 61 wards. Overall, 1430 VRE-cases were identified of which 409 (28.6%) were considered hospital-acquired (HA). We found that carbapenem use in the current month and prior-month use of glycopeptides increased the risk for HA-VRE by 1% per 1 DDD/100 PD and 3% per 1 DDD/100 PD, respectively. However, when only VRE from clinical samples were considered, only glycopeptide use showed a statistically significant association. In both models, detection of at least one patient with CA-VRE on a ward in the current month significantly increased the risk of HA-VRE, thereby indicating nosocomial spread of VRE. 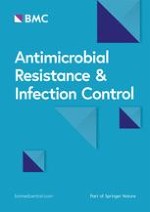 Outbreak of Fusarium oxysporum infections in children with cancer: an experience with 7 episodes of catheter-related fungemia

“Who has to do it at the end of the day? Programme officials or hospital authorities?” Airborne infection control at drug resistant tuberculosis (DR-TB) centres of Karnataka, India: a mixed-methods study