Ectodermal dysplasia (ED) is a congenital syndrome characterized by abnormal development of ectodermal structures, such as skin, hair, nails, teeth, or salivary glands. Patients with ED demonstrate craniofacial dysmorphology, midfacial hypoplasia and hypodontia. The aim of this study is to evaluate volume and surface area of maxillary sinus and craniofacial structures in patients with ectodermal dysplasia (ED) using cone-beam computed tomography (CBCT) images.

The CBCT images of 20 patients with ED (study group) and 20 healthy individuals (control) which are equal in terms of age and gender were evaluated. After a three-dimensional analysis and segmentation of each maxillary sinus, the volume and surface area were calculated. Craniofacial dimensions were measured on the sagittal planes of the CBCT images. The results of the ED and control groups were statistically compared.

The right and left sinus volumes and surface areas were significantly lower in the ED group than in the control group (p < 0.05) while the SNA was significantly higher (p < 0.05). ANB and SN-GoMe were also lower in patients with ED than in controls (p < 0.05). The difference in SNB values between the two groups was not significant (p > 0.05).

The volumes and surface areas of both maxillary sinuses were found to be smaller in patients with ED compared to healthy individuals. Class III malocclusion with maxillary retrusion is a characteristic craniofacial feature of these patients. 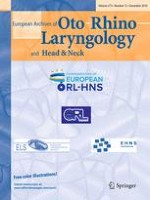 The effectiveness of hyperbaric oxygen in patients with idiopathic sudden sensorineural hearing loss: a systematic review