Clinically, male patients subjected to colorectal surgery are more prone to develop anastomotic leakage than female patients by unknown mechanisms. Our aim was to investigate the impact of gender on anastomotic wound healing using an experimental model.

The anastomotic breaking strength decreased from day 0 to day 3 with no significant gender differences either in the extent of decline (P = 0.122) or absolute day 3 strengths (P = 0.425). Analogously, total collagen concentration in the anastomotic wounds decreased postoperatively and were lower (P = 0.043) in the male compared with the female rats on day 3. MMP-9 levels increased in the anastomoses postoperatively, but they did not differ (P = 0.391) between male and female animals. Soluble collagen levels were lower in the day-3 anastomoses of male versus female rats (P = 0.015) and correlated positively with total TGF-β1 levels (rS = 0.540, P = 0.006). Although TGF-β1 tended to be lower in male compared with the female rats, the differences did not reach statistical significance.

Our findings point towards a less favorable collagen metabolism in colonic anastomoses of male compared with female rats during early wound healing. 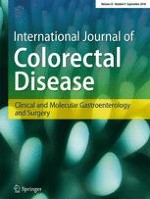 ERAS programs in elderly patients: is there a limit?