The aim was to investigate the effect of iron or combined iron/zinc supplementation on rat liver antioxidant status.

The 6-week male Wistar rats were examined in 3 stages: (1) 4-week adaptation to the diets (C—control AIN-93M diet, D—iron deficient and R—with 50 % reduction in all vitamin and mineral amounts); (2) 4-week supplementation with the same regimen enriched with tenfold more iron or iron/zinc; (3) 2-week post-supplementation period (the same diets as in the stage I).

The simultaneous iron/zinc supplementation can protect liver against peroxidative damage induced by high doses of iron during and after the intervention in rats fed iron-deficient diet and diet with reduced amounts of vitamins and minerals. The post-intervention observation is relevant because the effect may be delayed and visible only after this period. 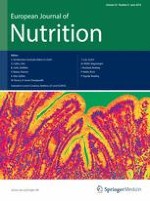 Who uses multivitamins? A cross-sectional study in the Physicians’ Health Study