We compared the suitability of pentobarbital sodium (PB) and propofol (PF) anesthetics for multifocal electroretinograms (mfERGs) in rhesus macaques. mfERGs were collected from 4 ocularly normal rhesus macaques. All animals were pre-anesthetized with intramuscular ketamine (10–15 mg/kg). Intravenous PB induction/maintenance levels were 15 mg/kg/2–10 mg/kg and for PF, 2–5 mg/kg/6–24 mg/kg/h. There were 3 testing sessions with PB anesthesia and 5–7 testing sessions with PF anesthesia. All PB sessions were carried out before PF. First-order (K1) and second-order (first slice) kernels (K2.1) response density amplitude (RDA), implicit time (IT), and root mean square signal-to-noise ratios (RMS SNR) of the low-frequency (LFC) and high-frequency (HFC) components were evaluated. The use of PF or PB anesthesia resulted in robust, replicable mfERGs in rhesus macaques; however, RMS SNR of K1 LFC in ring and quadrant analyses was significantly larger for PF than for PB. Additionally, K1 RDA under PF was significantly larger than under PB for N1, P1, and P2 components (ring and quadrant) and for N2 (quadrant). PF IT was significantly prolonged (<1 ms) relative to PB IT for N1, P1 (ring), and N1 (quadrant), while PB IT was significantly prolonged (0.8–4.2 ms) relative to PF IT for N2 and P2 (ring and quadrant). K1 HFC and K2.1 LFC did not differ significantly between PB and PF in the ring or quadrant analyses. The response differences found with PB and PF anesthesia likely arise from variable relative effects of the anesthetics on retinal γ-aminobutyric acid (GABAA) receptors, and in part, on glycine and on glutamate receptors. Given the advantages of a stable anesthetic plane with continuous intravenous infusion and a smoother, more rapid recovery, PF is an appealing alternative for mfERG testing in rhesus macaques. 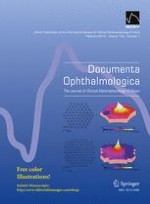 Electroretinography in healthy subjects in relation to systemic glucocorticoid intake

Negative electroretinograms in the pediatric and adult population

The pathogenesis of early retinal changes of diabetic retinopathy