Major wound complications (MWCs) are frequent after preoperative radiotherapy (RT) for extremity soft-tissue sarcoma (STS). We examined the rate of MWCs at a single institution with readily available reconstructive surgery.

MWCs are frequent after preoperative RT and occur more commonly in patients with lower extremity tumors. The MWC rate observed in a single-institution setting was comparable to that observed in the preoperative therapy arm of a multicenter Canadian trial. Patients believed to be at higher risk for MWCs undergoing RSS closure have MWC rates comparable to those with lower-risk wounds closed by the primary team. 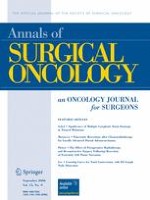 Hospital Volume and Inpatient Mortality After Cancer-Related Gastrointestinal Resections: The Experience of an Asian Country