The outcome of radioiodine therapy (RIT) in Graves’ hyperthyroidism (GH) mainly depends on radioiodine (131I) uptake and the effective half-life of 131I in the gland. Studies have shown that lithium carbonate (LiCO3) enhances the 131I half-life and increases the applied thyroid radiation dose without affecting the thyroid 131I uptake. We investigated the effect of short-term treatment with LiCO3 on the outcome of RIT in patients with long-lasting GH, its influence on the thyroid hormones levels 7 days after RIT, and possible side effects.

Study prospectively included 30 patients treated with LiCO3 and 131I (RI-Li group) and 30 patients only with 131I (RI group). Treatment with LiCO3 (900 mg/day) started 1 day before RIT and continued 6 days after. Anti-thyroid drugs withdrawal was 7 days before RIT. Patients were followed up for 12 months. We defined a success of RIT as euthyroidism or hypothyroidism, and a failure as persistent hyperthyroidism.

In RI-Li group, a serum level of Li was 0.571 ± 0.156 mmol/l before RIT. Serum levels of TT4 and FT4 increased while TSH decreased only in RI group 7 days after RIT. No toxic effects were noticed during LiCO3 treatment. After 12 months, a success of RIT was 73.3% in RI and 90.0% in RI-Li group (P < 0.01). Hypothyroidism was achieved faster in RI-Li (1st month) than in RI group (3rd month). Euthyroidism slowly decreased in RI-Li group, and not all patients became hypothyroid for 12 months. In contrast, euthyroidism rapidly declined in RI group, and all cured patients became hypothyroid after 6 months.

The short-term treatment with LiCO3 as an adjunct to 131I improves efficacy of RIT in patients with long-lasting GH. A success of RIT achieves faster in lithium-treated than in RI group. Treatment with LiCO3 for 7 days prevents transient worsening of hyperthyroidism after RIT. Short-term use of LiCO3 shows no toxic side effects. 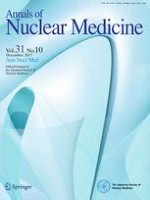 Uptake of AV-1451 in meningiomas

Bone metastases from breast cancer: associations between morphologic CT patterns and glycolytic activity on PET and bone scintigraphy as well as explorative search for influential factors