Two hundred cases of inpatients with first-episode drug-naïve schizophrenia were randomly assigned to 6–8 weeks of treatment with either of aripiprazole, risperidone, quetiapine, olanzapine, or ziprasidone from October 2012 to November 2014. The efficacy, acceptability, and safety measurement after 6–8 weeks of treatment of the five kinds of antipsychotics were evaluated by the deduction rate of Brief Psychiatric Rating Scale (BPRS) total score, the proportion of treatment discontinuation, and adverse events, respectively. Whether the treatment discontinuation or combination therapy for baseline antipsychotics after titration mainly depended on ineffective or less effective on an initial-assigned antipsychotic during the study period.

BPRS total scores in each antipsychotic group were significantly decreased at the end of the study (P < 0.01), and only the deduction rate of BPRS total scores in the risperidone group was markedly higher than those in the groups of aripiprazole (P < 0.01) and olanzapine (P < 0.05) after controlling the impact of the differences of age of onset. There were significant differences between quetiapine (χ 2 = 5.46, P = 0.019), olanzapine (χ 2 = 5.6, P = 0.018), and ziprasidone regarding the proportion of maintaining on initially allocated therapy. In addition, the difference in treatment discontinuation between male and female patients was also significant (χ 2 = 9.897, P = 0.002), and odds ratio of treatment discontinuation in male and female patients was 0.37 (95% CI 0.198–0.693); however, no difference in treatment discontinuation was found between five antipsychotics. Extrapyramidal symptoms in the groups of quetiapine and olanzapine were notably less than the other three kinds of antipsychotics (P < 0.05), but there were no significant differences in other adverse events between the five antipsychotic groups. 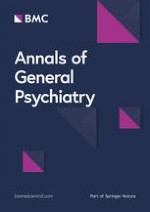 Serum prolactin levels and sexual dysfunction in patients with schizophrenia treated with antipsychotics: comparison between aripiprazole and other atypical antipsychotics

An arabic translation, reliability, and validation of Patient Health Questionnaire in a Saudi sample

Analysis of EEG entropy during visual evocation of emotion in schizophrenia