The efficacy and safety of Apatinib mesylate in the treatment of metastatic osteosarcoma patients who progressed after standard therapy and the VEGFR2 gene polymorphism analysis | springermedizin.de Skip to main content
TOOLBAR 1 2 3 4
SUCHE MENÜ 1 2 3 4

The aim of this study was to investigate the efficacy and safety of Apatinib mesylate in the treatment of metastatic osteosarcoma patients who progressed after standard therapy and the VEGFR2 gene polymorphism analysis.

Designed as a retrospective study, a total of 105 metastatic osteosarcoma patients who progressed after standard therapy were included in this study. The metastatic osteosarcoma patients received 500–750 mg Apatinib mesylate according to body surface area until disease progression or unacceptable toxicity with 28 days one cycle. Overall response was evaluated after two cycles Apatinib treatment, then progression-free survival (PFS) and overall survival (OS) were evaluated, and safety data were recorded. Additionally. peripheral blood and peripheral blood mononuclear cell (PBMC) specimens in the osteosarcoma patients were collected for the genotyping of VEGFR2 genetic variation and mRNA expression, respectively. Analysis on the association between genotype and baseline characteristics and VEGFR2 gene mRNA expression was analyzed. The univariate analysis of genotypes and prognosis was carried out by Kaplan–Meier survival analysis, and multivariate analysis was adjusted by Cox regression analysis.

Apatinib was safe and effective in the treatment of metastatic osteosarcoma patients who progressed after standard therapy. The clinical outcomes of Apatinib may be influenced by the polymorphism − 906 T > C of VEGFR2 through mediating the mRNA expression of VEGFR2. 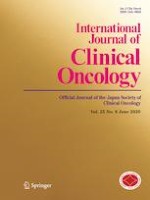 Use of a prognostic risk score that aggregates the FDG-PET/CT SUVmax, tumor size, and histologic group for predicting the prognosis of pStage I lung adenocarcinoma

Tumor-agnostic precision oncology: striving to prioritize internationalization for the management of cancer patients