The online version of this article (https://​doi.​org/​10.​1007/​s00701-017-3390-y) contains supplementary material, which is available to authorized users.
Rania A. Mekary and Marike L. D. Broekman shared last author
Presentation at conference: Contents of this manuscript were presented at the North American Skull Base Society meeting, New Orleans, March 3–5, 2027.

In the past decade, the endonasal transsphenoidal approach (eTSA) has become an alternative to the microsurgical transcranial approach (mTCA) for tuberculum sellae meningiomas (TSMs) and olfactory groove meningiomas (OGMs). The aim of this meta-analysis was to evaluate which approach offered the best surgical outcomes.

A systematic review of the literature from 2004 and meta-analysis were conducted in accordance with the PRISMA guidelines. Pooled incidence was calculated for gross total resection (GTR), visual improvement, cerebrospinal fluid (CSF) leak, intraoperative arterial injury, and mortality, comparing eTSA and mTCA, with p-interaction values.

In this meta-analysis, eTSA was not shown to be superior to mTCA for resection of both OGMs and TSMs. 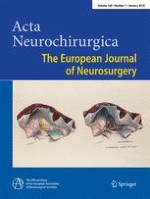 Relation of gray-white matter ratio with long-term cognitive functions and quality of life in patients with mild to moderate aneurysmal subarachnoid hemorrhage: a prospective observational study