Guinea worm disease, classified as a neglected tropical disease, is one of the two diseases nearing eradication. When in 2015 the world’s leaders will evaluate the progresses toward the achievement of the MDGs, most likely both diseases will no longer affect humanity. GWD was eradicated in Uganda despite the country was plagued by poverty and civil unrest especially in the most affected northern regions. Keys to the success of the Uganda Guinea worm eradication programme were realist strategies of community involvement focusing on positive behavior changes. The role of motivated health workers played a crucial role, especially in understanding the lives of people and adapting culturally adequate health messages. The achievement of this public health success was based on a coordinated international support, effective national health policies, public-private partnerships, and local authorities’ involvement allowed.
Anzeige 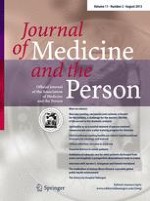 Spirituality as an essential element of person-centered compassionate care: a pilot training program for clinicians

Critical reflections on value in medicine

Muscular wasting, sarcopenia and cachexia: a trouble for the patients, a challenge for the doctors. The role of the person in this dramatic scenario