The Evidence Behind Weighted Ball Throwing Programs for the Baseball Player: Do They Work and Are They Safe? | springermedizin.de Skip to main content
TOOLBAR 1 2 3 4
SUCHE MENÜ 1 2 3 4

Weighted baseball throwing programs have gained significant attention recently. They have been promoted as proven option for pitchers wishing to increase their throwing velocity and improve throwing mechanics. However, there is some concern that, if not applied properly, they may increase injury risk. In this review, we aim to (1) give a brief description of the potential mechanisms through with weighed ball programs that could improve throwing velocity, (2) summarize the available evidence regarding their effectiveness in increasing throwing velocity, (3) summarize the evidence on injury risk, and (4) propose directions for future studies.

Initial research on weighted ball programs was published in the 1960s. Recently there has been an increase in research as interest from baseball organizations, instructors, players, and medical providers has grown. A recent randomized controlled trial demonstrated that pitching velocity can be increased through a 6-week weighted ball program; however, with that, they found that the rate of injury also increased. An earlier systematic review outlined 10 studies that evaluated weighted ball programs effect on pitching velocity and reported that 7 studies described increases in throwing velocity, while most studies did not comment on injury risk. They note that the results on rate of injury have been variable, likely secondary to the variability in time and intensity of different programs.

The inconsistency in the methodology of weighted ball programs and studies has made it challenging to draw (scientifically) meaningful conclusions. Nevertheless, several studies have offered empirical evidence in support of the claim that weighted ball programs can increase pitching velocity through improved throwing mechanics. At the same time, these studies have emphasized the improvements in performance, while the potential effects on injury mechanisms have been less well understood. There is a need for improved standardization of these programs to allow for future study and subsequent modification to optimize performance. 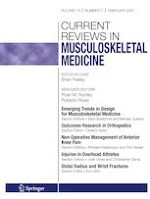 Femoral Stem Cementation in Hip Arthroplasty: The Know-How of a “Lost” Art

Patient Education in Orthopedics: the Role of Information Design and User Experience