Cryoglobulinemic vasculitis (CV) is a small-to-medium-vessel vasculitis that appears in 10–15 % of patients chronically infected with hepatitis C virus (HCV). The classic symptom triad of CV, purpura/asthenia/arthralgia, is accompanied by clinical features that include glomerulonephritis, neuropathy, interstitial pneumonitis, and cardiomyopathy, ranging in their severity from mild to life threatening. The risk of developing non-Hodgkin lymphoma is also higher. The cumulative 10-year survival rate of CV patients is significantly lower than in the age- and sex-matched general population, with death typically caused by nephropathy, malignancies, liver involvement, and severe infections. Unfailing serological stigmata include both a cryoglobulin IgM fraction with rheumatoid factor activity and decreased complement C4 levels. On peripheral B cells, the expression of the CD81 B cell receptor is reduced while that of the CD19 receptor is increased. A monoclonal B cell lymphocytosis develops in almost one-third of patients. HCV-related proteins (but not HCV-RNA genomic sequences) can be detected on biopsy samples by immunofluorescence and immunohistochemistry and involve the vessel lumen, vessel walls, and the perivascular spaces of the skin, kidney, and peripheral nerves, supporting the pathogenetic role of HCV in the onset of a widespread microvasculitis. Based on the demonstration of HCV infection in the large majority of CV patients, a therapeutic regimen consisting of once-weekly pegylated interferon-α and the daily administration of ribavirin results in a sustained virologic response in ~50 % of patients. In those with refractory and relapsing disease, addition of the anti-CD20 monoclonal antibody rituximab has significantly increased the overall response rates. The extension to CV of latest-generation direct-acting antivirals, strikingly successful in non-CV HCV-positive patients, has yielded high complete response rates according to the few studies published thus far. 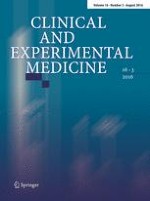