The fate of the hip in spondylo-epi-metaphyseal dysplasia: clinical and radiological evaluation of adults with SEMD Handigodu type | springermedizin.de Skip to main content
SUCHE MENÜ 1 2 3 4

This study was undertaken to document the fate of the hip with reference to its structure and function in patients with spondylo-epi-metaphyseal dysplasia tarda Handigodu type (SEMDHG).

Radiographs of 271 adult patients with SEMDHG were studied to identify the pattern of long-term sequelae in the hips. Several measurements of the proximal femur and acetabulum were made to quantify morphological alterations in the hip. Fifty-four adult patients were examined and administered a questionnaire to evaluate the extent of disability attributable to the hips.

Three patterns of changes in the hips were noted: 35% had acetabular protrusio, 33% had subluxation of the hip, and 32% had no protrusio or subluxation. Distinctly different anthropometric measurements and dimensional alterations around the hip were noted in these three patterns. Patients with protrusio were relatively tall while those with subluxation were the shortest. All the patients had developed degenerative arthritis of the hips by the fourth decade of life irrespective of the pattern of hip involvement. The reduction in the range of hip motion and fixed deformities were most severe in patients with protrusio. All the patients had significant disability and very low functional hip scores.

Degenerative arthritis of the hip develops in the majority of patients with SEMDHG; the symptoms are severe enough to warrant reconstructive surgery by the fourth decade of life. Protrusio or subluxation develops in a third of the patients each; both these complications will influence the surgical approach if total hip arthroplasty is planned.
Anzeige 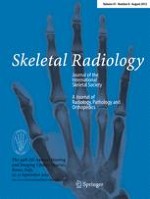 The association of infrapatellar fat pad oedema with patellar maltracking: a case–control study

Cone-beam computed tomography arthrography: an innovative modality for the evaluation of wrist ligament and cartilage injuries