Between July 2007 and April 2008, 82 cases of VAM–LDN were performed by two surgeons. From these cases, we randomly assigned 35 cases to undergo solo-surgery (group I) and the other 47 cases to undergo surgery with one human assistant (group II). All VAM–LDN procedures were performed in the same manner. Only the roles of a first assistant were substituted by the Unitrac® in group I. We compared the perioperative and postoperative data, including operative time, estimated blood loss, and hospital stay, between the two groups. We also investigated cases that developed complications.

Our study demonstrates that VAM–SLDN can be performed safely, is economically beneficial, and is comparable to VAM–HLDN in terms of postoperative outcomes. 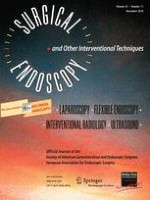 Pushing the envelope in biomaterial research: initial results of prosthetic coating with stem cells in a rat model