Many studies quantitatively analyzing scientific papers have appeared in the last 2 years. Citation analysis is a commonly used bibliometric method. In spite of some limitations, it remains a good measure of the impact an article has on a specific field, specialty, or a journal. The aim of this study was to analyze the qualities and characteristics of the 100 most cited articles in the field of bariatric surgery.

The Thomson Reuters Web of Knowledge was used to list all bariatric surgery-related articles (BSRA) published from 1945 to 2014. The top 100 most cited BSRA in 354 surgical and high impact general journals were selected for further analysis.

Many of the milestone papers in bariatric surgery have been included in this bibliometric study. A huge increase in research activity during the last decade is clearly visible in the field. It is apparent that the number of citations of an article is not related to its level of evidence; a fact that is increasingly being emphasized in surgical research. 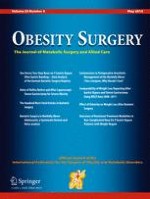 Inequity to the Utilization of Bariatric Surgery: a Systematic Review and Meta-Analysis

Response to Letter to the Editor from Anthanont Pimjai: Emerging Markers of Atherosclerosis Before and After Bariatric Surgery