Pre-operative radiotherapy (RT) followed by limb-sparing resection is commonly used to treat soft tissue sarcomas (STS) of the extremity and chest-wall; however, this is associated with an increased risk of post-operative wound complications (WCs) compared to adjuvant RT. The use of intensity-modulated radiotherapy (IMRT) in STS has been investigated; however, the impact on WC is sparsely reported. In this study, we assess the rates of WC in patients who underwent pre-operative 3D conformal RT (3D CRT) versus IMRT followed by surgery for STS.

From 2000 to 2012, 196 patients with localized STS were treated with RT +/− chemotherapy followed by resection. Patient, treatment variables, and outcomes were reviewed. Predictors for WC were evaluated using Fisher’s exact test for univariate analysis (UVA) and logistic regression for multivariate analysis (MVA).

IMRT was associated with a significantly decreased risk of post-operative WCs compared to patients who received 3D CRT for their STS. Further studies and a larger sample size are needed to corroborate these findings. 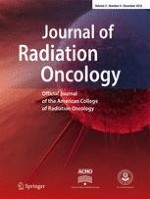 Considerations in radiation therapy for pregnant women with malignancy

Radiation therapy in the management of breast cancer brain metastases: the impact of receptor status on treatment response, intracranial recurrence, and survival

Erratum to: A phase II experience evaluating quality of life and survival in linac-based SBRT for prostate cancer