All stage II or III colon cancer patients who had surgery between 2004 and 2014 were identified. We analyzed patients with non-multivisceral resections (NMR) for pT4 tumors vs. pT4-LMR. In addition, outcomes were compared to both NMR and LMR pT3 patients.

LMR was performed in 55 (29.7%) of all patients with pT4 tumors and in 48 (8.9%) of all patients with pT3 tumors. The most commonly involved areas of extension were the abdominal wall and the small intestine. Transverse colon cancer was correlated with LMR. Morbidity rates were comparable between NMR and LMR, with the exception of higher rates of blood transfusion and postoperative ileus. Over one third of all pT4-NMR patients developed recurrent disease, which was higher compared to all other groups. Subsequently, overall and disease-specific survival, as well as disease-free survival (DFS), was worse for pT4-NMR, even after adjustment for pTN-staging, adjuvant therapy, and R0 resection. Furthermore, when analyzing only curative resections, radial margin < 1 cm along with nodal disease was independent predictor for worse DFS. Long-term outcomes were comparable between pT4-LMR and pT3 patients. 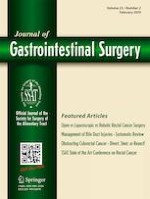