The impact of a standardized program on short and long-term outcomes in bariatric surgery | springermedizin.de Skip to main content
SUCHE MENÜ 1 2 3 4

The purpose of this study was to determine whether there has been an improvement in short- and long-term clinical outcomes since 2010, when the Ontario Bariatric Network led a province-wide initiative to establish a standardized system of care for bariatric patients. The system includes nine bariatric centers, a centralized referral system, and a research registry. Standardization of procedures has progressed yearly, including guidelines for preoperative assessment and perioperative care.

Eight thousand and forty-three patients were included in the bariatric registry between April 2010 and March 2015. Thirty-day mortality was rare (<0.075 %) and showed no significant difference between years. Three-month overall postoperative complication rates significantly decreased with standardization (p < 0.001), as did intra-operative complication rates (p < −0.001). Regression analysis demonstrated increasing standardization to be a predictor of 3 month complication rate OR of 0.59 (95 %CI 0.41–0.85, p = 0.00385). The mean percentage of weight loss at 1, 2, and 3 years postoperative showed stability at 33.2 % (9.0 SD), 34.1 % (10.1 SD), and 32.7 % (10.1 SD), respectively. Sustained regression in obesity-related comorbidities was demonstrated at 1, 2, and 3 years postoperative.

Evidence indicates the implementation of a standardized system of bariatric care has contributed to improvements in complication rates and supported prolonged weight loss and regression of obesity-related diseases in patients undergoing bariatric surgery in Ontario.
Anzeige 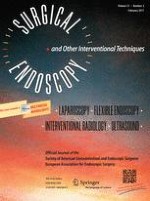