In the developed and developing countries, the overall prevalence of central obesity in the elderly men is growing. In addition, the progressive aging of male population increased the possibilities of coexisting morbidities associated with obesity such as lower urinary tract symptoms (LUTS) due to benign prostatic enlargement (BPE) or to prostate cancer (PCa) needing primary treatment, including radical prostatectomy (RP), which can further adversely affect the quality of life. Simple and radical prostatectomy are the most common surgical procedures in urologic unit all over the world for BPE and PCa, respectively. After both interventions, patients can present bothering storage LUTS that can worsen all the other clinical outcomes. Preset study will review the role of central obesity as a risk factor for storage LUTS or urinary incontinence, after prostatic surgery for BPE or PCa. 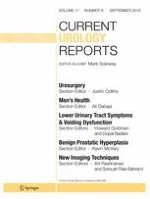 Preoperative Imaging for Clinical Staging Prior to Radical Cystectomy