The goal of this project was to investigate the contentious issue of a possible effect of endocrine therapy (ET) on sexual dysfunction (SD) in postmenopausal early stage breast cancer survivors. To date, few studies have assessed sexual functioning prior to initiating ET and none have taken sexual distress into account when reporting the prevalence of ET-induced SD. We report the findings of a study on the change in SD (defined as experiencing sexual problems causing distress) during the first 6 months of ET usage. Between January 2009 and May 2011, 118 patients entered the study and 66 completed questionnaires prior to initiation of ET and after 6 months of use. Sexual functioning (SF) was evaluated with the female sexual function index while sexual distress was assessed with the female sexual distress scale (FSDS-R). Gynecological symptoms were measured with the FACT-B ES subscale. Over time, the level of gynecological symptoms increased (p < 0.001), whereas no decline in SF was observed. The percentage of women who reported experiencing at least one sexual problem (85 %) and the percentage who were sexually distressed (30 %) remained the same across time. Importantly, the change in the prevalence of SD between baseline (24 %) and 6 months (29 %) was not statistically significant. Women experiencing SD at baseline were more likely to experience SD after 6 months of ET usage (OR = 7.4, 95 % CI = 1.5–36.9) than women who had no SD prior to initiating ET. The observation that SF remained stable across time is encouraging news. However, longer follow-up and the inclusion of women who were premenopausal at diagnosis are needed to determine the potential influence of extended duration of ET (e.g., at least 5 years) on SD. Further studies, including assessing the impact of early identification of patients at risk of developing SD and timely intervention, are warranted. 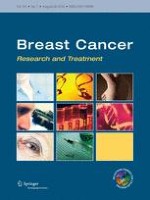