The online version of this article (https://​doi.​org/​10.​1007/​s00401-018-1952-6) contains supplementary material, which is available to authorized users.
Florian Haller and Caterina Giannini are co-senior authors.

Meningeal solitary fibrous tumor (SFT)/hemangiopericytoma (HPC) is a rare tumor with propensity for recurrence and metastasis. Although multiple classification schemes have been proposed, optimal risk stratification remains unclear, and the prognostic impact of fusion status is uncertain. We compared the 2016 WHO CNS tumor grading scheme (CNS-G), a three-tier system based on histopathologic phenotype and mitotic count, to the 2013 WHO soft-tissue counterpart (ST-G), a two-tier system based on mitotic count alone, in a cohort of 133 patients [59 female, 74 male; mean age 54 years (range 20–87)] with meningeal SFT/HPC. Tumors were pathologically confirmed through review of the first tumor resection (n = 97), local recurrence (n = 35), or distant metastasis (n = 1). A STAT6 immunostain showed nuclear expression in 132 cases. NAB2–STAT6 fusion was detected in 99 of 111 successfully tested tumors (89%) including the single STAT6 immunonegative tumor. Tumors were classified by CNS-G as grade 1 (n = 43), 2 (n = 41), or 3 (n = 49), and by ST-G as SFT (n = 84) or malignant SFT (n = 49). Necrosis was present in 16 cases (12%). On follow-up, 42 patients had at least one subsequent recurrence or metastasis (7 metastasis only, 33 recurrence only, 2 patients had both). Twenty-nine patients died. On univariate analysis, necrosis (p = 0.002), CNS-G (p = 0.01), and ST-G (p = 0.004) were associated with recurrence-free (RFS) but not overall survival (OS). NAB2–STAT6 fusion type was not significantly associated with RFS or OS, but was associated with phenotype. A modified ST-G incorporating necrosis showed higher correlation with RFS (p = 0.0006) and remained significant (p = 0.02) when considering only the primary tumors. From our data, mitotic rate and necrosis appear to stratify this family of tumors most accurately and could be incorporated in a future grading scheme. 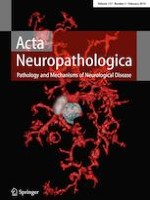 TIA1 regulates the generation and response to toxic tau oligomers