Hospital-acquired infections (HAIs) are a common complication in inpatient care. We investigate the incentives to prevent HAIs under the German DRG-based reimbursement system. We analyze the relationship between resource use and reimbursements for HAI in 188,731 patient records from the University Medical Center Freiburg (2011–2014), comparing cases to appropriate non-HAI controls. Resource use is approximated using national standardized costing system data. Reimbursements are the actual payments to hospitals under the G-DRG system. Timing of HAI exposure, cost-clustering within main diagnoses and risk-adjustment are considered. The reimbursement-cost difference of HAI patients is negative (approximately − €4000). While controls on average also have a negative reimbursement-cost difference (approximately − €2000), HAI significantly increase this difference after controlling for confounding and timing of infection (− 1500, p < 0.01). HAIs caused by vancomycin-resistant Enterococci have the most unfavorable reimbursement-cost difference (− €10,800), significantly higher (− €9100, p < 0.05) than controls. Among infection types, pneumonia is associated with highest losses (− €8400 and − €5700 compared with controls, p < 0.05), while cost-reimbursement relationship for Clostridium difficile-associated diarrhea is comparatively balanced (− €3200 and − €500 compared to controls, p = 0.198). From the hospital administration’s perspective, it is not the additional costs of HAIs, but rather the cost-reimbursement relationship which guides decisions. Costs exceeding reimbursements for HAI may increase infection prevention and control efforts and can be used to show their cost-effectiveness from the hospital perspective. 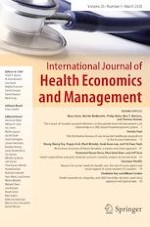 Reasons for unmet needs for health care: the role of social capital and social support in some western EU countries