This study evaluated the efficacy of tegafur-uracil for advanced oral cancer.

From January 2008 to December 2013, clinical data from 356 patients with stage III or IV oral squamous cell carcinoma who received curative surgical resection and postoperative concurrent chemoradiotherapy, treated with or without tegafur-uracil, were analyzed from a prospectively designed database. Tegafur-uracil was orally administered to 114 of the 356 patients. Disease-specific survival (DSS), disease-free survival (DFS), and overall survival (OS) rates were studied. 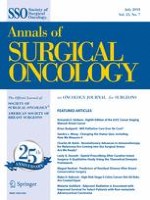 The Effect of Temperature and Perfusion Time on Response, Toxicity, and Survival in Patients with In-transit Melanoma Metastases Treated with Isolated Limb Perfusion

Adjuvant Therapy in the Treatment of Melanoma

Changing the Status Quo, Including How We Measure It

Implementing a Program of Talimogene laherparepvec