Currently, musculoskeletal pain has become a major health problem around the world [ 1]. The most recent report of the global burden caused by the 25 leading diseases and injuries in 2010 showed that low back pain ranked as the seventh with 80,667,000 of disability-adjusted life-years (DALYs), followed by neck pain as the twenty-first with 32,651,000 of DALYs. Other musculoskeletal disorders was ranked the twenty-third with 30,877,000 of DALYs, whereas ischemic heart disease ranked as the first with 129,795,000 of DALYs [ 2].
In the recent decade, many epidemiologic studies focused on multi-site musculoskeletal pain, and their findings revealed that the prevalence of multi-site pain is high in both general and working populations including hospital workers [ 3– 11]. The prevalence among health care providers is about 40 – 50 % depending on definition of pain site and study population [ 4, 6].
Anzeige
Epidemiologic studies found the multi-site pain associates with poor work ability in working populations [ 12– 14]. A prospective study among food-industrial workers demonstrated that the number of pain sites predicted poor work ability after 4 years of follow-up with a dose–response manner [ 13]. However, no epidemiologic evidence is available among the hospital working population. Hence, the aim of the present study was to confirm whether the number of pain sites has an association with poor work ability among health care providers.

The present study was cross-sectional study conducted among health care providers of a tertiary hospital in Thailand between April 2014 and June 2014. The self-administered paper questionnaires were distributed in the hospital with convenient sampling. There was no reminder to complete the questionnaires. Eligibility criteria included being a health care provider including physicians, nurses, pharmacists, dentists, medical technicians, and physical/occupational therapists who worked in the hospital at least six months, were able to communicate in Thai, and consented to participate in the present study. Retired workers, outsourced personnel, and those suffering from tumors, fracture, chronic infection or systemic and neurologic diseases were excluded. The present study protocol was approved by the Institutional Review Board, Royal Thai Army Medical Department.

The outcome in the present study was work ability assessed by the work ability index (WAI). This questionnaire was developed by the Finnish Institute of Occupational Health in the 1980s comprising seven items including current work ability compared with the lifetime best, work ability in relation to the demands of the job, number of current diseases diagnosed by a physician, estimated work impairment due to diseases, sick leave during the past year (12 months), own prognosis of work ability 2 years from now, and mental resources [ 15]. All items were weighted and summed up to a total score of seven (the poorest) to 49 (the best). The present study used a short version with 14 groups of diseases in the third item (51 diseases in the original version) [ 16]. In the present study, the work ability index was dichotomized as good (37 – 49) and poor (7 – 36) [ 17].

The exposure in the present study was the number of pain sites assessed by self-administered paper questionnaire with a question on pain symptom in four-different anatomical regions including neck, upper extremities, low back, and lower extremities within the last month. Pain at the upper and lower extremities was recorded including the right, left, or both sides [ 12]. Pain intensity of each region was measured by zero (no pain) to ten (the worst pain) on a numerical pain rating scale. Each answer was dichotomized according to a numerical pain rating scale: less than five (no) and at least five (yes). Binary outcome of four-different anatomical regions was computed as the number of pain sites and categorized in three groups including no pain (0), few pain sites (1 – 2 sites), and many pain sites (3 – 4 sites).
Anzeige

Age, stress problem, and satisfaction in workload, payment, rest time, teamwork, and working environment were included in multivariable logistic regression analysis as confounders of the association between the number of pain sites and poor work ability [ 9, 18– 21]. Age was categorized in two groups: less than 40 years and at least 40 years old. Stress problem was evaluated by a stress test (ST5) questionnarie which was developed by Department of Mental Health, Ministry of Public Health of Thailand comprising five items: sleep problem, decreased concentration, irritability, boredom, and social isolation. Each item was scored between zero and three, so its total score of ST5 questionnaire ranged from 0 to 15. Scores were dichotomized into categorical data of stress problem (No = not more than four, and Yes = more than four) [ 22]. Each topic of job satisfaction was measured by a 5-level Likert scale: highly satisfied, satisfied, partially satisfied, not satisfied, or not at all satisfied. However, in statistical analysis, these data were divided into two categories of satisfaction (Satisfied = highly satisfied or satisfied, and Not satisfied = partially satisfied, not satisfied, or not at all satisfied).

Impact of the number of pain sites on work ability

The present study is the first to reveal the negative impact of the number of pain sites on work ability among health care providers. The hypothesis in this study was the association between musculoskeletal pain and poor work ability would be stronger when the number of pain sites increased. The main findings supported this hypothesis.
Anzeige
The main results showed that participants who had few pain sites were 1.9 time more likely to develop poor work ability than those who had none, while this probability increased to 3.0 times in participants who had many pain sites by crude analysis. After adjustment for age, stress problem, and job sattisfaction in the regression model, the tendency for this result still remained. Hence, the number of pain sites could predict the probabity of poor work ability among health care providers. However, the results in those who had few pain sites were not significant by multivariable analysis. This was likely caused by the small sample size resulting in a wide 95 % confident interval. To compare with previous studies, these findings were similar to the health survey among Finnish general workers, and the prospective study conducted among Finnish industrial workers [ 12, 13].
The present study had several stengths. Firstly, this study focused on musculoskeletal pain within the last month to reduce the recall bias. Next, the WAI, one of the the validated international questionnaires of work ability assessment, was used to determine poor work ability [ 15]. Importantly, this study was concerned with the effect of some potential confounders and included them in the logistic regression model.
On the other hand, some weaknesses were observed in this study. The major limitation was the lack of a temporal relationship between the number of pain sites (exposure) and work ability (outcome) because this study employed a cross-sectional design. In addition, This study was carried out only in a tertiary care center involving a great workload and number of responsibilities, so the results from this study could not be applied to other hospital care settings such as a primary care unit. Moreover, all data were collected by the self-administered questionnaire without objective assessment, for example, a physical examination to determine musculoskeletal pain. Hence, information bias or invalidation of data might occur, but a questionnaire survey seem to be the practical way to assess musculoskeletal pain in epidemiological studies [ 13]. Finally, Participants who had many pain sites tended to have chronic pain which might have affected work ability [ 3]. Therefore, a subgroup analysis divided by pain duration could be conducted in further studies.

The probability of poor work ability would be higher when the number of pain sites increased. Multi-site musculoskeletal pain should be concerned not only in industrial working populations but also in hospital working populations, and should be specially attended in occupational health services, for example, annual health examination, ergonomic concerns, and walk-through survey. In addition, among health care providers, the self-administered questionnaire for simply counting the number of pain sites could be a screening instrument to detect workers who have the risk of poor work ability.
Anzeige

We would like to thank Assoc. Prof. Jariya Boonhong, M.D. for her contribution in the design of the study. This study was finacially supported by Phramongkutklao Hospital.
This is an Open Access article distributed under the terms of the Creative Commons Attribution License ( http://​creativecommons.​org/​licenses/​by/​4.​0), which permits unrestricted use, distribution, and reproduction in any medium, provided the original work is properly credited. The Creative Commons Public Domain Dedication waiver ( http://​creativecommons.​org/​publicdomain/​zero/​1.​0/​) applies to the data made available in this article, unless otherwise stated. 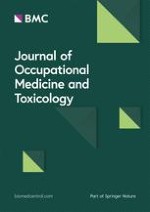 Usage of gloves for hair shampooing in German hairdressing salons

The rubber manufacturing industry: a case report and review of cutaneous exposure and sequelae