The online version of this article (doi:10.​1007/​s00134-013-3188-1) contains supplementary material, which is available to authorized users.
Take-home message: In patients with severe ARDS, prone positioning was associated with a higher risk of pressure ulcers than the supine position. This means preventive measures should be implemented when the decision to use prone positioning is made.

This was an ancillary study of a prospective multicentre randomised controlled trial in patients with severe ARDS in which the early application of long prone-positioning sessions was compared to supine positioning in terms of mortality. Pressure ulcers were assessed at the time of randomisation, 7 days later and on discharge from the intensive care unit (ICU), using the four-stage Pressure Ulcers Advisory Panel system. The primary end-point was the incidence (with reference to 1,000 days of invasive mechanical ventilation or 1,000 days of ICU stay) of new patients with pressure ulcers at stage 2 or higher from randomisation to ICU discharge. 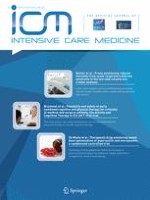 What’s new in the controversy on the renal/tissue toxicity of starch solutions?

Feasibility and safety of early combined cognitive and physical therapy for critically ill medical and surgical patients: the Activity and Cognitive Therapy in ICU (ACT-ICU) trial

Research accomplishments that are too good to be true: comment