Measuring the strength of directed functional interactions between brain regions is fundamental to understand neural networks. Functional near-infrared spectroscopy (fNIRS) is a suitable method to map directed interactions between brain regions but is based on the neurovascular coupling. It, thus, relies on vasomotor reactivity and is potentially biased by non-neural physiological noise. To investigate the impact of physiological noise on fNIRS-based estimates of directed functional connectivity within the rostro-caudal hierarchical organization of the prefrontal cortex (PFC), we systematically assessed the effects of pathological perturbations of vasomotor reactivity and of externally triggered arterial blood pressure (aBP) fluctuations. Fifteen patients with unilateral stenosis of the internal carotid artery (ICA) underwent multi-channel fNIRS during rest and during metronomic breathing, inducing aBP oscillations at 0.1 Hz. Comparisons between the healthy and pathological hemispheres served as quasi-experimental manipulation of the neurovascular system’s capability for vasomotor reactivity. Comparisons between rest and breathing served as experimental manipulation of two different levels of physiological noise that were expected to differ between healthy and pathological hemispheres. In the hemisphere affected by ICA stenosis, the rostro-caudal hierarchical organization of the PFC was compromised reflecting the pathological effect on the vascular and neural level. Breathing-induced aBP oscillations biased the magnitude of directed interactions in the PFC, but could be adjusted using either the aBP time series (intra-individual approach) or the aBP-induced fNIRS signal variance (inter-individual approach). Multi-channel fNIRS, hence, provides a sound basis for analyses of directed functional connectivity as potential bias due to physiological noise can be effectively controlled for. 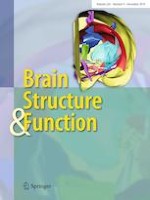 Structure related to function: prefrontal surface area has an indirect effect on the relationship between amygdala volume and trait neuroticism

The descending motor tracts are different in dancers and musicians