To investigate the influence of the introduction of total mesorectal excision (TME) on local recurrence rate and survival in patients with rectal cancer.

A total of 171 consecutive patients underwent anterior or abdominoperineal resection for primary rectal cancer. When the TME technique was introduced, the clinical setting, including the surgeons, remained the same. Group 1 (1993–95, n = 53) underwent conventional surgery and group 2 (1995–2001, n = 118) underwent TME. All patients were followed for 7 years or until death.

The introduction of TME led to an impressive reduction of the local recurrence rate. Survival is mainly determined by the occurrence of distant metastasis, but TME seems to improve survival in patients without systemic disease. 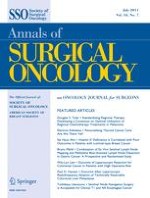 Personalizing Thyroid Cancer Care: Are We There Yet?

Prognosis of Hepatocellular Carcinoma in Relation to Treatment Across BCLC Stages