The controlled, nonrandomized study recruited 37 POP patients in the Prolift group and 30 non-POP patients in the control group. Two urogynecologists performed the Prolift procedure. One experienced physiotherapist who was blinded to the grouping conducted the surface electromyography (SEMG) evaluation using an intravaginal probe. The patient was considered objectively cured if she had stage 0 or I according to the Pelvic Organ Prolapse Quantification system (POP-Q) at the 3rd month postoperatively. Two types of contractions, namely maximum voluntary contraction (MVC) and short, fast contractions (SFC) in 6 s were performed at each SEMG measurement. The SEMG data were collected once in the control group on admission and twice in the Prolift group (on admission and at the 3rd month postoperatively). The t test, Mann–Whitney U test, and Wilcoxon test were used for statistical analysis.

A total of 36 POP patients were cured by the Prolift procedure. At the 3-month follow-up, the voltage and duration of MVC as well as the numbers and voltage of SFC increased significantly in the Prolift group. These variables were lower in POP patients compared to women without POP.

The restoration of pelvic anatomy may account for the improved PFM function with increased electrical activity in POP patients verified by SEMG. Evaluation of PFM function may be used as a clinical tool in the overall assessment of pelvic reconstructive surgeries. 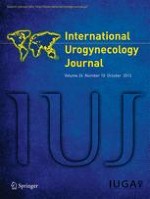 Design and development of a novel intra-vaginal pressure sensor

Surgical treatment of pelvic organ prolapse: a historical review with emphasis on the anterior compartment