A total of 1,681 patients were diagnosed preoperatively with unilateral inguinal hernia. None of these patients had complaints of the contralateral side preoperatively. All patients underwent laparoscopic inguinal hernia transabdominal preperitoneal (TAPP) repair. Operative details were analyzed retrospectively. Patients with occult contralateral defects were identified and tracked. Patients with an evident occult hernia received immediate repair. Patients with a smaller beginning or incipient hernia were followed.

This study shows that the incidence of occult contralateral hernias is 13 % during TAPP repair of unilateral diagnosed inguinal hernias. In 5 % of the cases, the occult hernia consisted of a beginning hernia. Eventually, one of five will become symptomatic and require repair. These outcomes support immediate repair of occult defects, no matter its size. 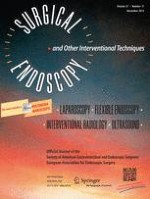 Minimally invasive esophagectomy versus open surgery: is there an advantage?

Internal hernia due to adjustable gastric band tubing: review of the literature and illustrative case video