Infection is the most common complication of external ventricular drain (EVD) placement. National trends in the annual incidence of meningitis among patients with traumatic brain injury (TBI) who have undergone EVD placement have not been reported.

The Nationwide Inpatient Sample was used to select adults with a primary diagnosis of TBI who underwent EVD placement between 2002 and 2011. Annual rates of meningitis among patients who underwent EVD placement were determined. We also calculated mortality rates and length of stay (LOS). Potential factors associated with meningitis were evaluated in a binary logistic regression analysis.

Out of 1,571,927 adult discharges with a primary diagnosis of TBI between 2002 and 2011, 39,029 (2.5%) underwent EVD placement. Of these, 1544 (4.3%) patients developed meningitis. There was no significant trend in the annual incidence of meningitis (p = 0.88), mortality (p = 0.55), or mean LOS (p = 0.13) during the study period. Meningitis and mortality rates remained stable when stratifying patients by hospital volume. In the binary logistic regression, acquired immunodeficiency syndrome, sepsis, and cerebrospinal fluid leak were associated with meningitis.

The incidence of meningitis in patients who underwent EVD placement remained stable between 2002 and 2011. Further prospective studies are needed to identify approaches for preventing these infections. 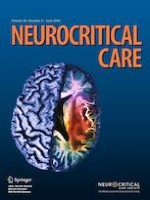 The Feasibility, Safety and Effectiveness of a Ketogenic Diet for Refractory Status Epilepticus in Adults in the Intensive Care Unit

Quantitative Continuous EEG: Bridging the Gap Between the ICU Bedside and the EEG Interpreter