Fluid replacement during cycling exercise evolves on a spectrum from simply drinking to thirst to planned structured intake, with both being appropriate recommendations. However, with mixed findings suggesting fluid intake may or may not improve endurance cycling performance (ECP) in a diverse range of trained individuals, there is a clear need for summarised evidence regarding the effect of fluid consumption on ECP.

Studies were located via database searches and cross-referencing. Performance outcomes were converted to a similar metric to represent percentage change in power output. Fixed- and random-effects weighted mean effect summaries and meta-regression analyses were used to identify the impact of drinking fluid on ECP.

A rate of fluid consumption of between 0.15 and 0.34 mL/kg body mass/min during high-intensity 1 h cycling exercise is associated with reductions in ECP. When cycling at moderate intensity for >1 to ≤2 h, cyclists should expect a gain in performance of at least 2% if fluid is consumed at a rate of 0.15–0.20 mL/kg body mass/min. For cycling exercise >2 h conducted at moderate intensity, consuming fluid ad libitum or at a rate of 0.14–0.27 mL/kg body mass/min should improve performance by at least 3%. Until further research is conducted, these recommendations should be used as a guide to inform hydration practices. 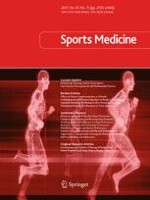 Compression Garments and Recovery from Exercise: A Meta-Analysis

“Beet-ing” the Mountain: A Review of the Physiological and Performance Effects of Dietary Nitrate Supplementation at Simulated and Terrestrial Altitude

How Much Rugby is Too Much? A Seven-Season Prospective Cohort Study of Match Exposure and Injury Risk in Professional Rugby Union Players

Exercise for Multimorbid Patients in Primary Care: One Prescription for All?

High Rates of Return to Sports Activities and Work After Osteotomies Around the Knee: A Systematic Review and Meta-Analysis

Effects of Mindfulness Practice on Performance-Relevant Parameters and Performance Outcomes in Sports: A Meta-Analytical Review