Using a non-image-based navigation system, kinematics and anatomical data of six fresh-frozen specimens were collected. A passive flexion–extension from 0° to 90° and static acquisitions at 0°, 30°, 60° and 90°, with and without 25 N of lateral load, were performed with intact and resected MPFL with a 60 N axial force applied to the isolated quadriceps tendon. Patellar tilt and shift were analysed.

The MPFL has an aponeurotic nature. It works as a restraint during motion, with an active role under high stress on lateral side, but with a small contribution during neutral knee flexion. Its biomechanical behaviour under loading conditions should be kept into account when performing surgical reconstruction of this ligamentous structure. 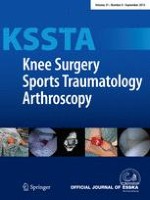 Pectoralis major transfer for subscapular deficiency: anatomical study of the relationship between the transferred muscle and the musculocutaneous nerve