The Landscape of Videofluoroscopy in the UK: A Web-Based Survey | springermedizin.de Skip to main content
SUCHE MENÜ 1 2 3 4

Videofluoroscopy (VFS) is considered one of the gold-standard assessments of swallowing. Whilst guidelines for the application and conduct of VFS exist, their translation into clinical practice remain challenging. To build a greater understanding on how VFS clinics operate in the UK. A web-based survey was shared with speech and language therapists (SLTs) working in VFS clinics via professional networks and social media from October 2018 to January 2019. 101 responses were received. Two thirds of clinics were SLT-led, with the majority of clinics being run by two SLTs (73.6%) and a radiographer (95.5%) also known as radiologic technologists, diagnostic radiographers and medical radiation technologists. Less than 50% of radiographers had received specialist training. Around half of the clinics used a standard assessment or analysis protocol and 88.1% a rating scale. Set recipes for a range of textures were used in 53.4% of VFS clinics. Barium and water soluble contrasts were used, but only 15.8% knew the concentration of contrast used. The most commonly reported VFS pulse and frame rate was 15 per second. There was evidence of a lack of SLT knowledge regarding technical operation of VFS. Screening times varied from 0.7–10 min (median 3 min, IQR 2.5–3.5). Around 50% of respondents reported quality issues affecting analysis. In a survey of UK SLTs, translation of VFS guidance into practice was found to be limited which may impact on the quality of assessment and analysis. Collaboration with radiology, strengthening of guidelines and greater uptake of specialist training is deemed essential.
Begleitmaterial
Supplementary file1 (PDF 189 kb)
Supplementary file2 (PDF 101 kb)
Supplementary file3 (PDF 79 kb)
Hinweise

Videofluoroscopy (VFS) is an instrumental tool for assessing the physiology and safety of oropharyngeal swallowing as well as oesophageal clearance. During the assessment, a patient is asked to swallow different volumes and consistencies of foods and drinks mixed with a radio-opaque contrast to allow visualisation on X-ray. Swallowing strategies and manoeuvres are also trialled to compensate for physiological impairments in the swallowing. It is one of the ‘gold standard’ assessment tools in the field because both anatomical hallmarks and swallowing physiology can be visualised in real-time. VFS is usually carried out by a speech and language therapist (SLT) and a radiologist and/or a radiographer. Radiographers, also known as radiologic technologists, diagnostic radiographers and medical radiation technologists are healthcare professionals who specialise in the imaging of the human anatomy for the diagnosis and treatment of pathology.
In 2006, a UK survey conducted by Power and colleagues revealed variability in the conduct of VFS clinics with a range of assessment materials and protocols being used, an under use of research evidence in the preparation of assessment materials, the lack of specialist training for SLTs and radiographers and limited interdisciplinary working [1]. Since then the Royal College of Speech and Language Therapists (RCSLT) updated their position paper [2] giving broad guidance with regards to the technical set-up, assessment and analysis methods and working with the radiologist or radiographer to optimise image quality whilst keeping radiation exposure as low as reasonably achievable (ALARA).
Anzeige
Further research has also been conducted into VFS processes that can have an impact on the interpretation of findings. Several studies have compared different temporal resolutions of VFS and the effect on interpretation of physiological and aspiration events [3‐5]. A number of studies have documented the importance of using the correct concentration of contrast and consistency of materials to ensure reliable VFS interpretation [6‐8].
Little is known about how UK practice has changed since the 2006 survey and whether RCSLT VFS guidelines or recent research has filtered into clinical practice. The aims of this study were to build an up-to-date understanding of how UK VFS clinics are conducted, how guidelines and research have been embedded into practice and how this compares to the findings of 2006.

The survey was shared via professional networks and social media between October 2018 and January 2019. SLTs who were involved in VFS clinics were asked to complete the survey for their clinic. This was on a voluntary basis; respondents did not receive any compensation for their participation. Dissemination of surveys in this way allows wide coverage of a population. However, using this method means that the size of the population that receives it cannot be determined.
Anzeige

Data were analysed using SPSS 24 and Microsoft Excel 2016, descriptive statistics were used to describe and summarise the data. The Chi-square test was used to test associations between categorical variables. Several questions allowed a free text or ‘other’ response with opportunity for free text, which resulted in a spectrum of responses to the same question. For example, screening times were given in whole values, ranges, minimum and maximum values. Responses were grouped into categories where appropriate for the purposes of analysis. However, for the purposes of analysis of the banding (grade) of SLTs, minimum band SLT was taken and if a range was given, the minimum value was assigned.

The UK has Government-funded medical and health care services that everyone living in the UK can use without being asked to pay the full cost of the service. Components of this National Health Service (NHS) are organised into clinical care groups (CCGs) overseeing primary care (including general practice) and secondary care trusts providing acute and specialist services. Responses were received from 73 acute NHS trusts, representing 54.8% of the 135 acute hospital trusts in the UK. However, there are likely to be several VFS clinics across each trust. The response rate and response bias were not able to be accurately estimated because it is unknown how many SLTs involved in VFS clinics received notification of the survey via social media adding to the fact that the number of VFS clinics nationwide is not clearly defined.

The number of patient appointments ranged from 0 to 12 per week across services with a mean of 4.1 (SD 2.8) slots. A small percentage of responses (4%) related to paediatric clinics. As numbers were small, associations with other responses such as staffing, technical set-up or assessment and analysis could not be derived.
Anzeige

IRMER Operators are legal duty holders who are entitled to carry out practical aspects of a medical exposure. Practical aspects include the physical conduct of the exposure and other supporting aspects that have an influence on radiation dose to the patient. Of the 78 clinics where a radiologist is ‘not’ or ‘only sometimes’ present, the radiographer acts as Operator 65.4% (51/78) of the time, SLT 19.2% (15/78), both 1.3% (1/78), while the remainder of responses were unclear (1.3%), not applicable (7.7%) or not known (5.2%).

Of the SLTs that reported that the SLT acts as an Operator, 81.2% (13/16) reported they have received Operator training.

A range of textures were reported to be tested during the assessment, including normal diet and fluids. International Dysphagia Descriptors Standardisation Initiative (IDDSI) fluid levels are used more frequently than the UK National descriptors. Several comments were received stating that they were preparing for a change over to IDDSI.
Set recipes are used in 53.4% (54/101) of services for preparing the oral trials, 45.6% (46/101) of services reported they do not use recipes; however, 11% (5/46) of these reported they are working on introducing recipes.

29.7% replied that they were unaware of the frame rate they use. The most frequently reported frame rate is 15 fps (30.7%), followed by 30 fps (21.8%). Supplementary Online Material 3 shows the imaging mode and frame rate reported by respondents.

The number of VFS clinics across the UK is unknown therefore it is impossible to estimate response rate which is important in evaluating the quality of the results and in identifying non-response bias [33]. There was however representation across the UK, therefore good geographical representation has been achieved. A second limitation of web-based surveys is that there may be multiple responses from the same individual or clinic by requesting hospital names it helped to identify these cases. A further limitation of using surveys is the uncertainty of whether the responses received reflect true clinical practices or the knowledge of the respondent. Information about the respondents was not gathered, therefore SLT experience is not known, a factor which could impact on knowledge based questions. Finally, several respondents had difficulties accessing the survey as some NHS trusts do not allow access to web-based surveys.

To achieve accurate, reliable and repeatable results from VFS investigations, certain operational criteria need to be met. These criteria are described in National VFS guidelines and in research literature. Our research shows that UK VFS clinics have implemented some, but not all, of these criteria. Data quality was often reported as an issue, suggesting that technical processes are not optimal. Storage limitations for VFS recordings may contribute to reduced quality of captured images. SLTs demonstrated reduced awareness of the technical configuration of their VFS clinic. Specialist training for radiologists, radiographers and SLTs may help to address this. Barriers would need to be explored further, but collaboration with radiology at a national level and the creation of more detailed and up-to-date national guidelines may help to ensure current knowledge about best practice filters into clinical practice. Further research comparing water soluble contrasts with barium in VFS analysis is required as little is known about these products, which are widely used in the UK. This survey has explored practices in the UK; however, further research into international VFS clinic practice would be beneficial.

This study is funded by the National Institute for Health Research (NIHR) Applied Research Collaboration East Midlands (ARC EM). The views expressed are those of the author(s) and not necessarily those of the NIHR or the Department of Health and Social Care.

The authors declare that they have no conflict of interest.
Open AccessThis article is licensed under a Creative Commons Attribution 4.0 International License, which permits use, sharing, adaptation, distribution and reproduction in any medium or format, as long as you give appropriate credit to the original author(s) and the source, provide a link to the Creative Commons licence, and indicate if changes were made. The images or other third party material in this article are included in the article's Creative Commons licence, unless indicated otherwise in a credit line to the material. If material is not included in the article's Creative Commons licence and your intended use is not permitted by statutory regulation or exceeds the permitted use, you will need to obtain permission directly from the copyright holder. To view a copy of this licence, visit http://​creativecommons.​org/​licenses/​by/​4.​0/​. 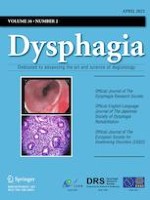 Influence of the Craniocervical Posture on Tongue Strength and Endurance

The Effect of Cranial Nerve Stimulation on Swallowing: A Systematic Review