Due to the failure of the “old Mason loop,” the mini-gastric bypass (MGB) has been viewed with skepticism. During the past 12 years, a growing number of authors from around the world have continued to report excellent short- and long-term results with MGB.

One university center, three regional hospitals, and two private hospitals participated in this study. From July 2006 to December 2012, 475 men (48.8 %) and 499 women (51.2 %) underwent 974 laparoscopic MGBs. The mean age of these patients was 39.4, and their preoperative body mass index was 48 ± 4.58 kg/m2. Type 2 diabetes mellitus (T2DM) affected 224 (22.9 %) of the 974 patients, whereas 291 of the 974 patients (29.8 %) presented with hypertension. The preoperative gastrointestinal status was explored in all the patients through esophagogastroduodenoscopia. The major end points of the study were definitions of both MGB safety and efficacy in the long term as well as the endoscopic changes in symptomatic patients eventually produced by surgery.

Despite initial skepticism, this study, together with many other large-scale, long-term similar studies from around the world (e.g., Taiwan, United States, France, Spain, India, Lebanon) demonstrated the MGB to be a short, simple, low-risk, effective, and durable bariatric procedure. 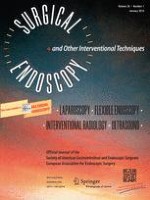 Effects of the closing speed of stapler jaws on bovine pancreases