The medial parapatellar arthrotomy (MPPA) is a commonly utilized surgical approach; however, the placement of the arthrotomy and its influence on intraoperative patellar tracking has not been evaluated.

Six knees from three fresh frozen cadavers with transthoracic amputations were operated on. All underwent standard posterior stabilized total knee arthroplasty using a medial parapatellar approach placed at the border of the vastus medialis oblique (VMO)–quadriceps junction. Patellae were resurfaced in the standard fashion. All patellae tracked normally with the first arthrotomy placed at the junction of the VMO–quadriceps tendon using the “no touch” technique. Measurement of patellar lift-off from the implant surface of the medial aspect of the trochlea on the femoral component was made at 50°, 75°, and 90° of flexion and a merchant view radiograph taken to evaluate radiographic patellar tilt. To simulate a more lateral placement of the MPPA, a 5–6 mm slice of quadriceps tendon was then removed from the lateral aspect of the tendon from the patellar insertion to the most proximal portion of the arthrotomy. This simulated a 5–6 mm more lateral placement of the parapatellar arthrotomy. The same measurements and radiographs were taken as described previously. Two more times the same size slices was removed from the quadriceps tendon with subsequent measurements and radiographs obtained.

The location of the MPPA has a significant influence on intraoperative assessment of patellar tracking. An MPPA more lateral in the quadriceps tendon may independently influence the patellar tilt observed intraoperatively and should be taken into consideration when evaluating intraoperative patella tracking. An understanding of the independent influence the MPPA has on patellar tracking may decrease the need for lateral release if the surgeon notes the MPPA was made more than 5–10 mm from the junction of the VMO–quadriceps tendon junction. 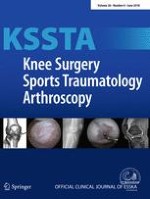