This study evaluated the differences in long-term cardiovascular events between obese patients who received bariatric surgery (BS), those who did not, and the general population (GP).

Between 2003 and 2008, patients with severe obesity, aged 18–55 years, were divided into the non-surgical (NS) and BS groups and were included in this retrospective study. We also extracted data of healthy civilians defined as the GP. The incidence of cardiovascular events, including myocardial infarction, intracranial hemorrhage, epidural hemorrhage, ischemic stroke, and transient ischemic attack, was defined as the primary end point. Patients were followed up either until the end of 2013, upon reaching the primary end point, or death.

Long-term risk of cardiovascular events was significantly lower among patients who had BS, compared to the NS obese patients. Thus, the long-term cardiovascular risk between those who received BS and the GP had no significant difference, in a retrospective view. 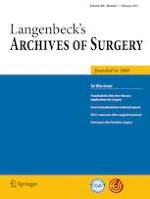 Mechanisms of nonalcoholic fatty liver disease and implications for surgery

Temporary portal decompression during liver transplantation: a video review of the different techniques