The purpose of the study is to describe the biomechanical theory explaining junctional breakdowns in thoraco-lumbar fusions, by taking the example of vertebral compression fractures. Also, a new angle, the cervical inclination angle (CIA), describing the relative position of the head at each vertebral level, is presented.

For the CIA, the data were collected from 137 asymptomatic subjects of a prospective database, containing clinical and radiologic informations. All the 137 subjects have an Oswestry score less than 15% and a pain score less than 2/10 and were part of a previously published study describing the Odontoïd-hip axis angle (ODHA). For each vertebral level from T1 to T12, the CIA as well as the vertical and horizontal distances was measured in reference to the sella turcica (ST), and a vertical line drawn from the ST. Average values and correlation coefficients were calculated.

The CIA is an angle whose average value varies very little between T1 and T5 (74.9°–76.85°), and then increases progressively from T6 to T12. T1–T5 vertebra are always in line within the thoracic spine for each subject and can be considered as a straight T1–T5 segment. In addition, it was found that the vertical inclination of T1–T5 segment is correlated with the C7 slope (R 2 = 0.6383).

The T1–T5 segment inclination is correlated with the C7 slope, and because the latter defines the cervical curve as previously shown, the T1–T5 segment can be considered as the base from which the cervical spine originates. Its role is, thus, similar to the pelvis and its sacral slope, which is the base from which the lumbar spine originates. The CIA along with the ODHA, which describes the adequacy of the global balance in young and elderly asymptomatic populations, are two important parameters that could help us to better understand junctional breakdowns in thoraco-lumbar fusion surgeries. 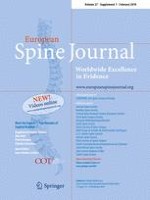 Paraplegic patients: how to measure balance and what is normal or functional?

Osteotomies in ankylosing spondylitis: where, how many, and how much?

Which parameters are relevant in sagittal balance analysis of the cervical spine? A literature review