Given the limited explanatory power of the available neurobiological findings, results of long-term follow-up studies should still be considered as one criterion among others in the development of psychiatric classification systems regarding schizophrenia and affective disorders. A total of 323 first hospitalized inpatients of the Psychiatric Department of the University Munich were recruited at index time and followed up after 15 years. The full follow-up evaluation including several standardized assessment procedures (AMDP, PANSS, SANS, DAS, GAS) could be performed in 197 patients. The patients originally diagnosed according to ICD-9 were re-diagnosed according to ICD-10 and DSM-IV, using SCID among others. Schizophrenic patients had a much poorer outcome than affective or schizoaffective patients in terms of negative syndrome, deficit syndrome, psychosocial impairments and GAS results, and a higher prevalence of a chronic course. The logistic regression analyses performed to find optimized predictor combinations for the prognosis of a chronic course found, for example, the total Strauss–Carpenter Scale score, male gender and several other psychopathological syndromes to be relevant predictors. The findings reflect some long-term related validity for the differentiation between schizophrenia and affective disorders. The Strauss–Carpenter Scale, male gender as well as several psychopathological syndromes are the most relevant predictors for chronicity. 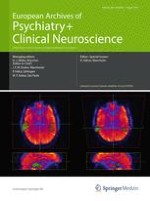 Duration of untreated illness and suicide in bipolar disorder: a naturalistic study

Affective disorders: the role of the duration of untreated illness, suicidality and pharmacogenetics